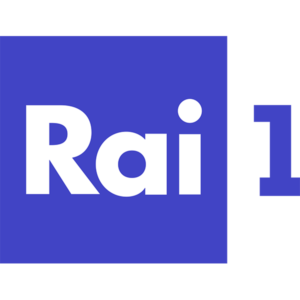 Rai 1 is the first Rai television channel, among the first at national level in terms of audience and share, and is aimed at a general public and families. Aired since the 1950s (the first network to broadcast in Italy under the name of the National Program), it has hosted, and still hosts, famous programs that have made the history of Italian television, such as the Sanremo Festival and Ballando con le stelle with Milly Carlucci, but also successful fiction such as Don Matteo and political in-depth programs such as Porta a Porta.

There is no shortage of entertainment programs with prizes, which attract the largest number of spectators in prime time, such as I Soliti Ignoti and L’eredità with over 20 share points each. Rai 1 also hosts TG1, one of the most popular national news programs.

The main programs on RAI 1 are:

TG1 is the first television news broadcast in Italy in the early 1950s. Born as a newscast, it changed its name in 1976 and has since become one of the most listened to information programs, not only on public television. Its numerous editions accompany viewers throughout the day until late in the evening, offering flash editions and various columns of interest such as Medicina and Rai Meteo, while at night the information is offered by RaiNews24. The collaboration of the newscast with Unomattina is important as regards information content. The 20.00 edition is the most followed by Italians with 24.6% and share with an average of 5.6 million listeners.

The Sanremo Festival is one of the most successful programs on Italian television and still today involves a large number of viewers (the 2021 edition achieved an average share of 53.5%). Housed inside Ariston Theater in the city of Sanremo, the song festival saw the conduct of great names of Italian television, like Pippo Baudo, Mike Buongiorno or Amadeus, and renowned international guests – including Queen and David Bowie –  also not related to music, such as Zlatan Ibrahimovic, regular guest of the 2021 edition. In 2022, among the main guests, Cesare Cremonini, the actor Raoul Bova, Laura Pausini and the rock group Maneskin, winner of the 2021 edition and now well-known all around the world. Although music remains the focal point, in recent years the program has been enriched with prizes, presenters and entertainment that occupy the schedule not only during the five days of the festival but also with satellite programs such as Grazie dei Fiori, born just as a preview.

Born in the late 90s, Porta a Porta is one of the most relevant political broadcasts within the Rai schedule. It airs three times a week in the late evening and is hosted by Bruno Vespa, accompanied by numerous guests who, together with him, discuss news stories, political news and changes in society and customs. The program has an average share of 8.38% but, over the years, it has been able to reach high peaks, especially on the occasion of particularly important guests of the political scene, and is characterized by the timeliness with which it offers its public information complete and exhaustive.

Every day at 6:45 am airs on Rai 1 Unomattina, an historic program that deals with current affairs and information. On a daily basis, thanks to the presence of guests both in the studio and in connection, the broadcast creates a picture of the most important issues of the day that may concern news, politics, culture, medicine or economics. There are also services based on reportage and specials according to the various topics, as well as columns dedicated to sustainability and recycling. During the weekend, however, the viewers are accompanied by Unomattina in famiglia, a space where we talk about sport, music, art and entertainment.

Ulisse – Il piacere della scoperta is one of Rai1’s historical dissemination programs. Conducted by Alberto Angela, it is best known especially for its thematic episodes that develop like stories, often accompanied by renowned guests, protagonists of Italian culture and entertainment. The topics covered mainly revolve around history, art and culture; several episodes are linked to the territory and have a more archaeological character while others focus on the life of illustrious characters in history, like Cleopatra, Marie Antoinette or John F. Kennedy. The broadcast usually reaches an average of at least 3,000,000 spectators, reaching a share of around 15-16%.

Hosted by Flavio Insinna and broadcast since 2002, L’eredità is one of the most watched game shows on television. With an average share of around 20%, the program can count on the participation of competitors who compete in preliminary rounds up to the “Guillotine”, a game in which the champion of the evening, after winning the title, has to guess the word that binds well with the other proposals to win the final prize. The relationship with the public has consolidated over the years up to an involvement also on social networks, thanks to the fans who every night try like the champion to find the correct answer, and to the production of board games. Traditionally broadcast in the pre-evening slot, it also has several special editions, often under the banner of solidarity.

Cost of advertising campaign on Rai 1

If you are interested in creating an advertising campaign on Rai 1, it is necessary to purchase packages of spots on air throughout the RAI network, which fall within the commercial policies of the networks. These packages are organized by price lists (table, special initiatives, product placement), by thematic paths (fiction, entertainment, sport, nutrition, kids, etc.) or by performances of the programs of Rai networks (such as the ‘best’ modules ‘, which include commercials on the peak programs of a network in the season in which the campaign is to be purchased). Once the programming has been defined, a proposal is sent to the customer that contains the expected performance of the campaign, such as the audience, gross contacts, the number of spots, the percentage of these in prime-time and the estimated GRP. An advertising campaign on television can be exclusive on a network or even across other channels, such as Mediaset or La7.